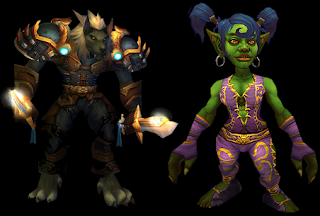 Folks have talked about the lore and the racials and the designs -- but what about the fun pointless stuff? The stuff we noticed first about our own characters when we started this game?

Every race has personalized pets, mounts, and emotes. We have semi-solid knowledge about the mounts we'll see -- but not so much about the rest.

Warcraftpets noticed a mastiff dog in the Gilneas preview (see image) and thinks maybe the data-mined Perky Pug will be the worgen pet (doggies!). I'm wondering, though, because they'll need about four or five of different colors for a race pet, so only data-mining one Perky Pug could mean it's a stand-alone pet.

Still, a new doggie should make people excited, and there's no reason worgens can't have doggies even if they don't have the pug. 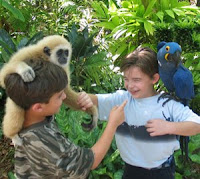 What do you think the island-loving goblins will have? Their brothers and sisters in Booty Bay sell parrots, so that's a no go. Monkeys? Don't want to nullify Bananas, of course. Lizard? Koala? Marmoset? Lemur?

The most obvious small "jungle" animals are monkeys, parrots, and lizards.

I hate monkeys, but I'm kind of rooting for a nice set of lemurs or koalas. Something small and cuddly.

Be forewarned, this is not only sheer speculation but also amateur speculation. I don't actually pay attention to musicians, dance, or music videos.

That said, I ran a search and think Ukrainian singer Ruslana has some worgen-esque energy. I think the second song is particularly appropriate for worgen (dancing starts 0:53), but I think the dancing past 1:00 in the first is more interesting for in-game repetitive motion.

I searched for island/tribal stuff for goblins, and got something a little too close to trolls/undead (but still awesome, so I linked it). Goblin has to have some attitude and diva-ness. (Thinking particularly of the females.) I can't see them doing anything slow due to their shortness.

This thing is really long but has a lot of modern dance styles -- maybe some potential for the male goblins. (Poor Miley Cyrus. She gets picked on so much.)

There are also several Latin nations whose dance hasn't made it into WoW yet, and which possess the requisite energy for goblins -- so perhaps a mambo, salsa, merengue, or RUMBA! Though most of these are partners dances, they all have bits that can be taken for a solo dance.