Antiarc's, or "Most Useful Warcraft Site of the Week/Month/Year"

Have you noticed people floating around with really cool signature images with their level and stats and everything? Think it's just a style everyone conforms to? No way! Antiarc's WoW Armory Tools is a site that provides many helpful tools, not just sigs that follow your progress without having to be updated.

Though the new, improved signature function is lovely, allowing you to add your own custom avatar to the banner (as I did above for Dustfire, but not for Birdfall), it isn't the only reason to visit. Antiarc provides a list of available tradeskills in any guild -- so if you're wondering how many blacksmiths vs. engineers you have in your guild, you don't have to run a poll. You can just check Antiarc's site.

I asked three very rich players (at least, they used to be) how to make gold quickly and easily.

How to make money in WoW (from NOTHING):

Step 1: Create a level 1 character. Place this character between the Auction House and Bank (mailbox should be nearby also). I recommend Silvermoon City or Orgrimmar for Horde, and Stormwind for Alliance.

Step 2: Create a main character (any class you like). Level to 6 in the starting area. Train MINING/HERBALISM and SKINNING.

Step 3: Mine/Herbalize/Skin EVERYTHING you come across.

Step 4: Mail full stacks of skins, ore, stone, herbs, and all valuable (green or better) items to your Bank Alt.

Step 5: Sell said stacks and items on the Auction House for JUST BELOW the lowest price (this will ensure a sale and since you have only a time investment thus far, it's the best and easiest way to build your bankroll).

Step 6 (ADVANCED ONLY): Take the money you have made from these investments and either horde it OR use the Auctioneer Add-On to re-invest by purchasing things for 50% of average sale price and reselling them for profit. I usually start out with sure-sales like trade items (the same things I've been selling from my farming) and work my way up to greens, blues and purples. Eventually, you'll land that one great buy like a 30 gold Crystal Pulse Shield that will send your bank account into the triple digits. But like all investing, you have to be willing to take risks, and you have to SPEND money to MAKE money.

Do 3 scans at least 2 hours apart.

I tend to stay away from 60+ gear or spell books (Codex: Prayer of Fortitude etc). Also, watch out for Wimpy (the most retarded person on Zuluhed) who put up a bunch of worthless items at really high prices to make it so it showed up on Auctioneer. Don't buy "Fishing Tournament!" or whatever.

Trade goods are almost always a sure sell, as well as twink items.

Well, mine are really not fair. I have access to a 70 lock, in return for helping this guy in our guild level. I farm elementals for motes, which turn into Primals (these items used in every tradeskill). Every 4 days I turn these primals and some easy-to-get cloth into Shadowcloth and Spellcoth which sell for like 60g each.

M_____ and me also transferred about 1500 gold from my/his old lock to this server using a friend's transfer and some trickery with neutral AH. Other than the above, I genuinely suck at the AH. However, I think I'll be pretty awesome at making cash at 70.

Addon: Have Auctioneer, and scan every time you head to the AH (so, every now and then). It helps you know how to price things and when you're getting a good deal.

Gather: Train mining while you level. You make [bronze bars] from [copper bars] + [tin bars]. Bronze is essential to leveling engineering and therefore sells very well. [Thorium], especially, is a goldmine, so never pass it up. (Un'goro Crater has lots of thorium.)

Farm: Motes of Air & Fire turn into the most costly Primals and can be farmed from elementals on the plateau northeast of Garadar & the Throne of the Elements in Nagrand.

Crafting Tailoring: Tailors at level 70 should constantly be making Spellcloth, Mooncloth, and Shadowcloth, which sell for 30g-60g, depending on your server. Felcloth has 17% drop rate from Felguard Elites.

Crafting JC: Jewelcrafters will have to spend a lot of money to get the best gem-cutting patterns, but the better patterns will make more money in the long-run. Focus on widely-used pvp gem patterns like +12 stamina (Solid Star of Elune) or + resilience.

Prospect Mining: Miners can ask a trusted jewelcrafter to Prospect stacks of adamantite, which can yield rare-quality gems (which go for ~20g each on my AH).

Dailies: At level 70, do your dailies, which afford roughly 10g per quest. Skettis dailies are available beside the Shattrath flight master once you have a flying mount. Ogri'la dailies have a 5-man quest chain to open them. Once you have epic flight (5,000g), Netherwing daily quests open up. Also daily instances, profession quests, and battleground quests reward gold plus honor or reputation.

The Draenei male dance is an unfortunate combination of ballet, seizure, and booty call. 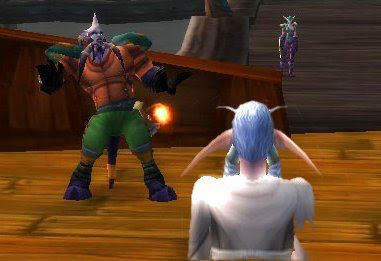 Seriously, though, here's the video with most of the class dances and their inspiration.
Posted by Beth at 11:03 AM 1 comment:

Armor, or "Shiny Things That I Want"

I just want you to know that my armor choices are based mainly on looks. Because that's how I roll.

It just so happens that Blizzard rolls with some pretty attractive top-tier sets. So this is what I would pick if I got anything I wanted for Christmas.

(The exact gear mentioned above.)
Posted by Beth at 3:03 AM No comments: