Aw Crap, or "Am I Really Closing Down the Blog? Really?!"

Well, ladies and gents, it looks like it's time for me to move on from WoW and, thus, close Letters from Birdfall.

I've played Sims 3 the last two weeks (pets expansion in October, woot!), and I'm working on creating my own neighborhood to stick my Real Life friends in.  Been at it for a few months, but I've really been into it now while I'm between temp jobs.

I will be going into other MMOs eventually, but I doubt I'll spend much time in WoW except maybe a holiday or two for old time's sake.  Lots of my friends are happy with Rift and there's the Star Wars MMO coming out later, and the "Titan" unnamed Blizzard MMO is coming out much later, so lots of options for when I want a new game.

If you want to keep up with me as a person:

Mount & Pet Images, or "These Cubs are So Freaking Cute!"

You've seen the Fire Hawk, now for its friends: 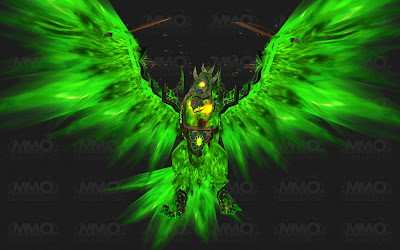 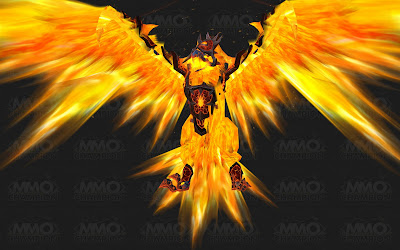 This is very pretty and will probably be uber-hard-to-get.  But enjoy the pretty picture!  :D
Posted by Beth at 7:51 AM No comments:

Zul'aman and Zul'gurub are coming back as high level 5-mans.  They bring along their old mounts -- bear, tiger, and raptor -- as rare drops.

The models or skins for the three classic mounts will be different.  Hopefully, they'll be updated to become even awesomer, but probably they'll just have different colors now.

Valentines 2011, or "Start Your Rockets, Ladies and Gents!"

It's a farming extravaganza!

I managed to get all relevant characters to 85 to farm the holiday boss for the mount (or, in Dusty's case, the rose helm).  This makes me happy.

An important change: you no longer queue from the LFD pane.  You now have to go to Detective Snap Snagglebolt [H] or Inspector Snip Snagglebolt [A].

A few elders have moved around, such as Stormwind's Elder being placed out front of the city (the game tells you to go to the destroyed park, but it's wrong).

Grab your invitation, use it in the column of moonlight, go here and get the Omen quest.  Head for this spot and look for a group killing Omen (if you do this in the first day, he is always being downed -- later in the week is much harder).  Help if you can.  You want to stand in him while he's dead, it doesn't matter if you helped kill him.  Turning in the quest with the buff on you from his corpse (dying removes it) gets another achievement.

There's a list here, but it's not 100% accurate for Cataclysm yet.  I'm sure it will be fixed by the end of the week, but here's a good rule of thumb: if you can't find an elder where it's supposed to be, go to wowhead and search for the elder's name (given in the wowwiki listing).  Under the Comments tab, go to the most recent comments and glance over them for the elder's new position.  You will always find the answer there.

If only coordinates are given and you don't use coordinates, go to Tools > Maps and select the area you're in.  As you hover over the map, it will give you coordinates and you'll be able to see where on the map your elder is.  :)

After Getting All Elders

Buy clothes with your tokens.

Mediocre, or "Do We Need a Player Reputation System?"

I'm of two minds about reputation systems that let players rank other players.  On the one hand, it would be nice to downrate jerks and uprate awesome people.  On the other, it would add an aspect to the game that I'm not convinced would be beneficial to players.

Today on Birdfall, I had a mediocre group in Throne of the Tides that lost 3 healers.  The first healer left after three wipes on the same boss.  The second helped us through that boss but chewed us out for being terribad and left.  The third stayed until the last boss when the tank had to leave and the group fell apart.

Personally, I would have liked to give props to my group even if we were pretty mediocre.  The tank and other dps were new to the instance and perfectly willing to admit when they didn't know what they were doing.  But they were also willing to keep trying.  They kept a quiet, honest respectability around them that the second healer didn't possess in his littlest finger.  He might have been "pro," but his social skills were terribad and got a /ignore from me.

There's something to be said for a group that rolls with its faults and doesn't implode.  I might not have rated us very high in skill for that run, but I would have given my group mad rep bumps for tenacity and patience.

I think I'd like to leave a group or finish a dungeon and get a popup for "Did you enjoy this group?  Yes/No" and yes gives a rep bump to everyone and you can also choose to rate each player individually:

Busy Birdfall is Busy, or "News on Why I've Been MIA"

I work a day job, do rated bg's on Wednesday, do RL family stuff on Friday, and have been recuperating from Christmas, then my anniversary, then brother-in-law-in-law's 21st birthday, and this next weekend is the first I've had to really chillax in several weeks but I'm also pressing for 85 on my alliance so I can try for the Pink Love Rocket starting Feb 6th.

Fox Pet, or "Just In Case You Missed It"

Fox Kit is a BOP drop from foxes in the normal daily questing zone of Tol Barad Peninsula.  This is not the "join for battle" zone, but it is contested which means players on PVP servers will be flagged for PVP combat.

The droprate of this pet is currently unknown, so if you plan to farm it please download the Wowhead Client to help them get accurate droprate numbers.  I'm going to guess it's a 1/1000 pet.