Awesome Breakthrough, or "Not About WoW, But It IS About Pretty Clothes"

I saw on Massively that people with no connection to WoW have made it so that clothing and hair in games can perform more realistically. This does not affect WoW, but it still makes me warm and happy, so I'm posting the videos. (Viewing fullscreen is fun.)

Gamer Health, or "The Sunny D"

Hiss! Cringe! What is this foul thing that burns us?!
Why, it's the sun!
I have long avoided direct sunlight. Not just because it hurts my eyes (seriously, no vampire jokes this time, it does) but because I'm a redhead and don't want to catch skin cancer from that big mean ball of fire.
Lo and behold, I've been absent this week because I went to the doctor for lethargy et cetera, and found out Wednesday I have low Vitamin D.
A vitamin you get from the sun.
Without it you're susceptible to flimsier bones, muscle pain, diseases (ranging from colds to diabetes to cancer), fatigue, depression, and you're less pretty.
(No, I'm not joking about the pretty. Your skin and hair get all dull, you lose weight slower, and it can even lead to deformations in children.)
[continue reading] ---------->
Posted by Beth at 3:33 PM 4 comments:

Mastery System, or "No, I Didn't Actually Read What It Does"

The mastery system is a thing that Blizzard is implementing in Cataclysm. There are lots of details for the theorycrafters to drool over (and I'll leave the reading of them to those guys), but an odd thought struck me:
I like how Blizzard is willing to keep trying new things and uses WoW players as guinea pigs.
I've said (once, in a very obscure post) that other games take tried-and-true systems from successful games and end up stagnating because they refuse to be truly innovative. This is because innovation carries a huge risk of failure and companies aren't likely to invest in a business model that doesn't have a good track record.
Blizzard, on the other hand, doesn't put a choke hold on WoW's game mechanics just because they might screw up whatever it is people like about the game. Instead, they add new things and test stuff out and keep pushing forward and learn from their mistakes.
Yeah, there are systems in WoW that players don't like. But there are plenty of things Blizz has put in that we do, and they at least make an effort at fixing what we hate about the things we hate.
So while other companies are talking about how WoW is popular because gamers like to kill each other in world combat (*gag*), Blizzard is testing all their innovative ideas (battlegrounds, arenas, glyphs, mastery) on their target audience and getting real feedback as to what systems work and what could work if they tweaked it and what doesn't work at all.
Blizzard's willingness to experiment and push forward is what I believe will keep them ahead in the long run.
Posted by Beth at 10:06 PM 3 comments:

From Annoying to Fun, or "Finding the Silver Lining in LFG"

I queued LFG on my 71 mage, waited 30 minutes, and the tank, after our first wipe caused by the healer getting web-wrapped (i.e. put out of commission unless the dps frees him), suggests the warrior dps should tank instead.

I gently mention that the warrior dps queued as just dps, so we should probably just keep going.

We pull another group and the tank admits he queued as tank just to reduce his wait.

Outfit of the Month, or "Lowcut Commoner Cloth" 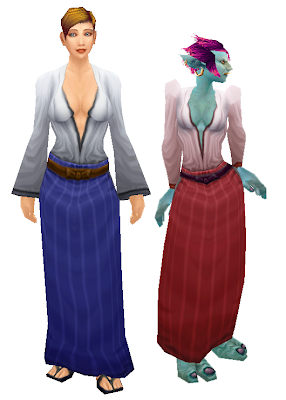 I saw the red version on a lowbie warlock one day and went "Huh. That's interesting."
You can slip a variety of shirts underneath, and I find that anything Filigreed from the shirt vendor in Dalaran looks great with the neckline (my second choice is a Stylish shirt). For a high-neckline alternative, Workman's shirts are your best bet.
And if you really like pink, the Pink Mageweave shirt doesn't look half bad under the red.
The sandals are actually my preferred RP footwear for anyone in a dress or long pants. They're one of the few shoes that stand out when you can't see a character's ankles.
[continue reading] ---------->
Posted by Beth at 11:53 PM 1 comment: