So I was nabbing the Gadgetzan bonfires on my 38 druid (2 right beside the one town) for Fire Festival. And so was a level 70 druid named Bps, who decided that I got to die.

A mite miffed, I rezzed inside the city walls and ran just outside to the flight master. I clicked him, looked at my destinations, and suddenly thought "I should check the Neutral Auction House while I'm here." Which I usually think of after I take off.

Now, lately, there's been a guy listing alliance pets at regular intervals on the Neutral AH. On a PVP server, this is pertinent because you can't create alliance characters if you're horde and go buy yourself some cute pets and do fun Neutral AH things to get them cheap. And on PVP servers, most alliance couldn't care less about getting horde some cute kitties or bunnies.

But this guy saw that the market was ripe and went for it, and I imagine he's made hundreds of gold at it by now (over 1g profit for each pet he sells, and he constantly refreshes his stock in the AH).

So I took my little level 38 over to check on the off-chance that he might have a cute rare pet up I could re-sell for an exorbitant amount.

I ended up making a quick sale of it to a friend for 300g (he asked what amount I was listing it for, thought about it, and asked me to C.O.D. it).

So thank you, meanie-face "Brb" or whatever your name was. You made me a ton of cash by delaying me half a minute.
Posted by Beth at 4:27 PM No comments:

Fire Festival, or "Pretty Clothes That Set You On Fire -- Literally" Fire Blossoms are your currency to buy things, so don't toss them on the bonfire until you know you don't want anything. (These disappear once the event is over, so you can't hold onto them for next year.)

Midsummer Merchants - Where you buy items with your flowers. Will be in the city hub.

Too low level? Think this has nothing for you? Think again! If you use the Ribbon Pole (available outside any festival tent), you get a buff for 10% experience increase! Buff caps at 60 minutes. Get the buff, go questing, and get it again when it runs out.

Also, the little bonfires (Honor & Desecrate) give experience! So grab them when you pass by to supplement your questing.

Playing with Fire - Speak to a master flame eater in a city hub (locations listed above). Followups are dailies.
Honor the Flame [5 blossoms reward] & Desecrate This Fire! [10 blossoms reward] - This is like Lunar Festival where you go to every town, of both factions, and they give you currency items. Wowhead and Wowwiki ought to have a location of all the Flame Keepers available in a few days, and you can track their bonfires by tracking them. For opposite faction towns, I walked up to the fire just outside each town on my 70, desecrated it, and left (PVErs, note that desecrating flags you for PVP). No hassle, though in Outlands you should make sure to get it from the far side. I've checked the following towns and found bonfires at each:
Due to my travels, it seems that every world zone will have a bonfire at each town with an inn. If there is a major Neutral town and just outposts for factions, the two bonfires will be close to the single Neutral town and there will be none at the outposts.

Unusual Activity - 15,20 Ashenvale. Kill until the note drops, use your totem, turn the note in, get followup An Innocent Disguise. Head north up the shore to Ashenvale 9, 12 and use the disguise to spy. Use the totem to finish the quest and get Inform the Elder where you turn it in a city hub (locations listed above). She will then open up the following quests:

Luma Skymother's Ice Shards - 20 blossoms reward [blossoms/tabard quest is one time only]. Head into Slave Pens (normal or heroic) and kill the (Midsummer-only) optional boss, Lord Ahune. Luma is just inside Slave Pens, but I think the quest starts when you kill him and loot the Ice Shards (only drop the once). Similar to Headless Horseman in that each party member can summon him once per day (so a party of 5 can do him 5 times a day unless they switch members out). He drops a pet and some epics that people might be interested in.
Stealing Flames - 25 blossoms reward EACH (4 flames to steal)! 100 total! Head into the 4 major cities of the opposing faction and loot their festival bonfire. Keep general and trade channels open to find a raid group going to do this. 70 druids and rogues might be able to solo it because of stealth. Turn in at Festival Talespinner/Loremaster in Org or Ironforge. Aside from the blossoms, you get a nice fiery crown. Must be level 50 to turn it in, but the stolen flames don't disappear from your inventory after the festival is over, so you can keep them to turn in next year if you want to.

I was able to take the Darnassus flame solo, but I was lucky b/c no 70s were around to bother me (level 65 non-elite guards). A team is much safer, and easier because you have to open the fire for a few seconds and anything hitting you breaks it. I couldn't have done it without my AOE fear (stealthers might have an edge). 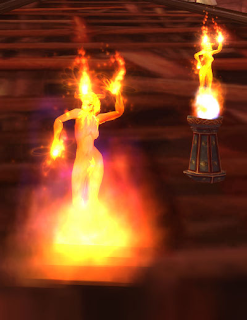 So far, I'm only interested in a few things. I'll list everything eventually, but start with the most exciting. :)

I easily got 100 blooms for the vestments with a level 38 druid.

Cenarion Circle Rep, or "How to Become an Herb Bag Goddess"

The best herb bags (20-slot & 24-slot) before Mycah's Botanical Bag are gained from being Friendly and Revered with Cenarion Circle, an old world faction.

Since I started tailoring recently, I decided to grind for them, but it's actually harder once the mob is grey. If you can start the grind while it still gives you experience, such as at 59, you'll get a lot more bang for your buck. 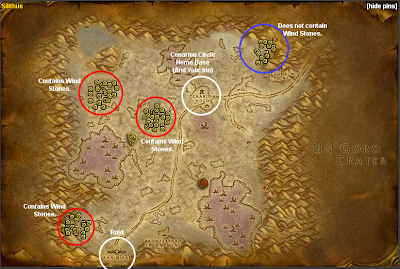 Twilight Prophet - 60 Elite. Has 2 regular mobs as guards. Gives the most rep: 30 if grey. ALSO drops 7-10 Encrypted Text pages, which is how many you need for a 500 rep turn in, so never EVER pass one of these up.

Twilight Cultists - All the non-elites walking around the circled camps on the map. Gives 10 rep if grey.

Anything wandering around Silithus with a Twilight name.

Twilight Cultist Gear
You can trade or buy these with friends or off AH, too.

The bigger the Wind Stone, the more gear you need to summon its boss. Once you do, the gear you used is eaten up, it disappears from your inventory (if you have more than one set, the process will suck up a set from your bags, not the one you're wearing). You have a moment to change back into your regular gear (5-10 seconds) before the bad guy attacks. 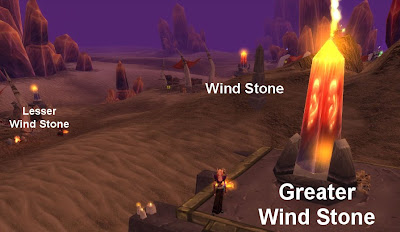 Almost all of the quests in Silithus give Cenarion Circle rep.

Head to the camp just west of Cenarion Circle town (see map up top). Grind mobs until you have a set of robe, shoulders, head. Summon an elemental boss at the Lesser Wind Stone. Get a feel for how that goes.

Start riding from camp to camp, looking for the rare named spawn (Twilight Lord Everun) AND the elite patrol that drops 7-10 rep pages (patrol spawns either in the north, walking from one western camp to the other, or in the south, heading up to the southern edge of the hive and back down to the camp).

After killing the patrol, stay and kill everything in the nearest camp for about twenty minutes, summoning and killing elementals at Lesser Wind Stones when you get the appropriate items to summon.

Then travel to the other camps to try and find respawns of rare guy and patrol. At least one should be back.

When your bags get full, go turn in your encrypted texts x10 and abyssal crests x3 (dropped from summoned elementals) for big chunks of rep.
Posted by Beth at 8:03 AM No comments:

We've already discussed making gold, but now we're going to talk about how to save for the things you want.

It's a basic fact that mounts and riding skills in the game are expensive. In fact, over a character's lifetime, if he or she wants all the available types of riding speed, it will cost 6,700g (NOT including mount prices, which tend to run 110g before 70).

And that's per character. Add a beloved alt into the mix, and you have some serious cashflow issues.

This is my advice:
Therefore, even if you don't have a lot of play time available, you can still manage your money in an intelligent way and save for the things you want.