Perfect Mounts, or "I Never Said I Was Realistic" 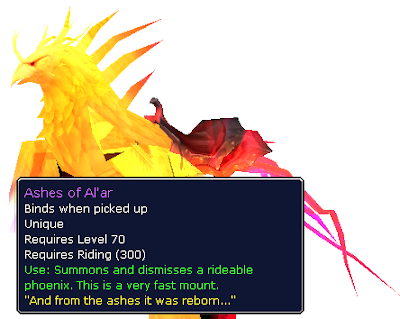 Last post, I mentioned the epic flying phoenix mount as the best-themed mount for Dustfire, taking into consideration her name and personality. (Dust and fire are both aspects of the phoenix, which is a fiery beast that burns itself out and is born again from its own ashes.)

This mount is a rare drop (estimated 3-8% drop) off of Kael'thas Sunstrider in the 25-man/level 70 raid instance, The Eye. I expect I'll have to run The Eye multiple times at level 80 with a group of friends before this mount actually drops. That means . . . Christmas 2008? 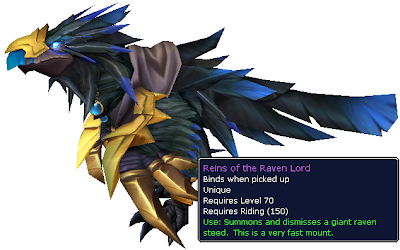 This is the Raven Lord, a rare epic land mount (NOT flying) also only available in a level 70 instance. Though the instance is the Heroic Mode Sethekk Halls, the boss who drops this mount (Anzu) can only be summoned by a druid who is performing or has finished his/her epic flight form quest. Therefore, only a party that contains a druid, and only if that druid has or is currently getting epic flight form, can summon the boss to drop this mount.

I have decided that I only want Birdfall to get this. Eventually. (Three years? I'm sure it will take that long. Maybe four, since I'm not currently leveling her.) Like with Dustfire and the phoenix, I think that the connection with the character's name is too good to overlook. A bird that cannot fly. Bird. Fall.

It makes me warm and fuzzy inside.
Posted by Beth at 7:57 PM 2 comments:

Dance Party, or "Aaron is the Sweetest Boy in My Guild, and You Can Quote Me"

Aaron is one of the youngest members in our horde guild, and I am among the older set (22 and up). In various outside-the-game Warcraft conversations, if someone mentions Aaron, the phrase "sweet kid" usually comes up, because it's impossible not to like Aaron. He's just a ... well, a sweet kid. ^_^

So I'm puttering around last night and Nevari calls me. "Can you get on for about five minutes?" she says.

I say, "Um, I guess," because it's not like her to be so mysterious. And in a few minutes, I'm in the middle of Undercity, checking my mail.

"Hey," says Aaron in guild chat. "I have something for you."

I smile and make a joke: "Is it a flying phoenix mount?" Because those are bind-on-pickup, and nobody could just hand me one. And they're in an instance we aren't ready for yet. And, oh yeah, they're a rare drop.

But everyone got the joke because I've been going on and on (annoying, maybe?) about how I really want one for Dustfire. I mean, look at her name. It just screams "I ride a phoenix." Dust. Fire. Yo.

I've been going on and on about something else, too. First, a related story.

Screenshots of Dumbness, or "Why'd They Have to Change Screenshots to JPEG..."

.... when I don't know how to change them back to the way they were? I had a system going. The ones I couldn't see thumbnails of were the working copies, and the PNG versions were the edited copies. *sigh* Now my screenshots folder is just a mess.
Anyway, on with the show! 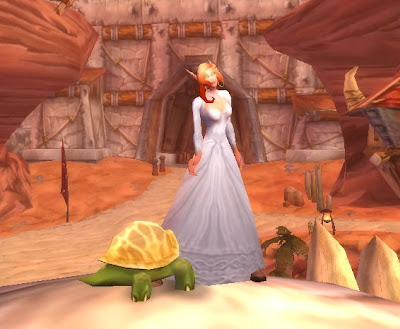 Nevari made me a White Wedding Dress! Yay!!! 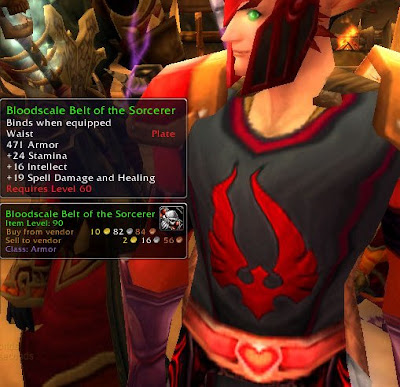 Our resident paladin has the gayest belt ever. Bloodscale Belt. I want one! It has a pink heart, see?!

The 80's Expansion, or "What Nevari and I REALLY Care About"

You have to understand -- Nevari and I play The Sims. We loved Barbies as kids. (Heck, Nev still does.) I have 864 MB of downloaded Sims hairstyles and 468 MB of clothing, and I know Nev likes downloading hair and clothes as much as I do, if not more.

So while we like pwning faces as much as the next player, it should be obvious that character designs are also very important to us.

Now, the Lich King expansion is coming out probably next year. It has level 80 (cap right now is 70), and a new class and profession and all that fun good stuff. It also claims to have new, changeable hairstyles (people have always complained that they can't change their character when they start hating the hair) and brand new dances (girls who play Night Elf Females can now look like non-strippers).

Here's the conversation Nev and I recently had about the expansion, as well as girl vs. boy players in general. 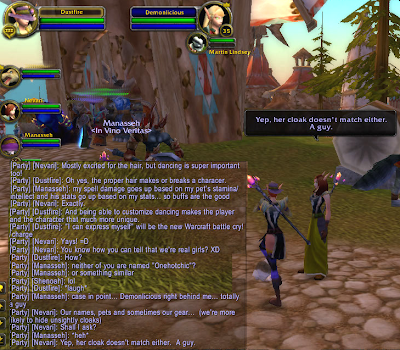 Nevari: Mostly excited for the hair, but dancing is super important too!
Dustfire: Oh yes, the proper hair makes or breaks a character.
Manasseh: (talking to the only other guy in the party) My spell damage goes up based on my pet's stamina/intellect and his stats go up based on my stats... so buffs are the good.
Nevari: (answering me, because who cares about buffs?) Exactly.
Dustfire: And being able to customize dancing makes the player and the character that much more unique.
Dustfire: "I can express myself" will be the new Warcraft battle cry!
Nevari: Yays! :D
Nevari: You know how you can tell that we're real girls? XD
Dustfire: How?
Manasseh: Neither of you are named "Onehotchic"?
Manasseh: Or something similar.
Shenoah: (only other guy in the party) lol
Dustfire: *laugh*
Manasseh: Case in point... Demonlicious right behind me... totally a guy.
Nevari: Our names, pets and sometimes our gear... (we're more likely to hide unsightly cloaks).
Nevari: Shall I ask?
Manasseh: *heh*
Nevari: (after she goes over to whisper Demonlicious) Yep, her cloak doesn't match either. A guy.

Playing Made Easy, or "Finding Other People You Can Stand"

I had a guy ask me the other day, "How did you get the money for your mount? I've been grinding for days and still don't have half enough."

I recommended the auctioning post, told him to take up mining, then said he should try to keep leveling because that was the most important thing.

He replied that his mount was the most important thing and thanked me for my advice.

What I guess I didn't get across was that leveling is important to your money, too. The higher level you are, the better drops you get, and better drops sell for more. It's also the easiest way to train any skill, such as mining. He had a head-start, being 40, but I've learned that it's very easy to go back to a level 12 area to grab all the copper you can when you're level 20 and nothing aggros on you. Faster, too.

But another great way to make money, I think, is to do instancing as you go along. Drops in instances tend to sell well.

So do I. This is where a decent guild becomes invaluable. It's best when you play with a few people you already know, but if you're playing alone, it can be hard to find a proper guild.

The most important mark of any good guild is respect. Generally, I would lean toward the guilds of people who are nice to me, but you should really do your research before leaping into any guild. Ask a few pertinent questions.
Obviously, the easiest solution would be to roll horde on Zuluhed and join my guild. As guilds go, we're pretty awesome. Not because we're l33t pwners (several are; not me, obviously), but because we get along. We like each other. Of course, we plan to do some serious level 70 raiding, but it's mostly about having fun as a group. The main problems thus far have been kind of small:
That will be fixed once we can do 10-mans.
This will be moot once we're 70.

Etc. So.... I'm sleepy. The point of all this is "You can do it! Try hard and find nice people to ally yourself with. Don't worry too much about money except when you need it for training talents. Walking won't kill you, but staying at a low level on a PVP server will."

Oh, and maim all the gnomes you can. That too. (Our guild has a thing against enemy gnomes, rogues, and hunters.)
Posted by Beth at 10:46 AM 1 comment:

Nell, my mount (named after my grandmother), got an upgrade. To me, she's the same bird with better gear. 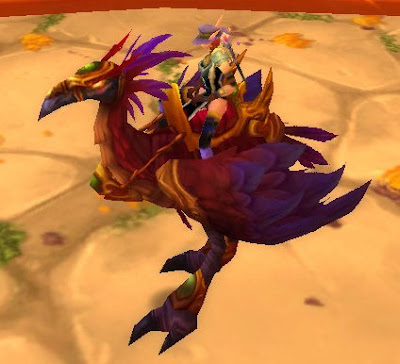 Beauty, or "Having Fun with Screenshots"

Here she is, folks, the sexiest girl in Warcraft. PRINCESS! (Boss in Maraudon.) Seriously, though, someone gave me the impression she was supposed to be really pretty. Imagine my confusion... 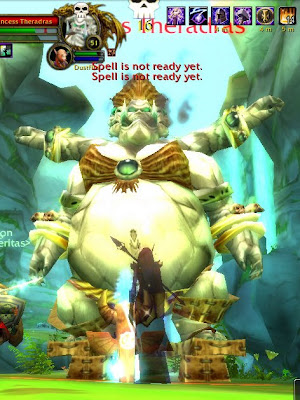 In other news, I made it through the Dark Portal with Dustfire (level 58 required). Now we're waiting for Manasseh and Nevari to catch up. There was some awesomeness going on the other side, too. 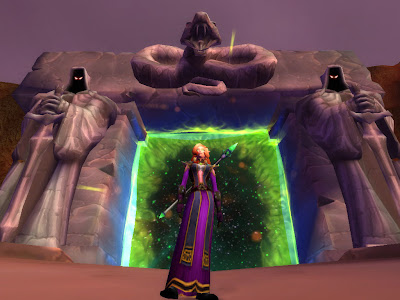 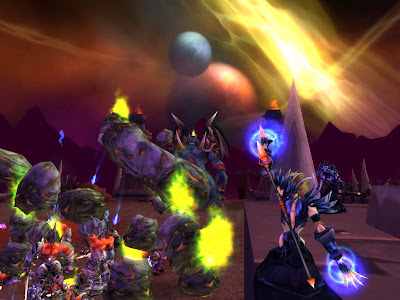 Prairie Dog, or "The Hardest Thing to Find Ever"

Prairie dogs are 45s each. 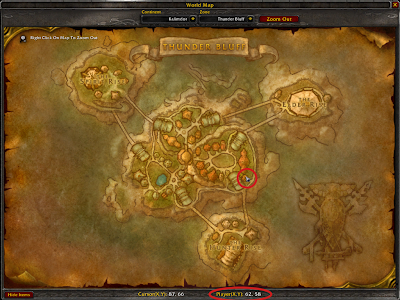 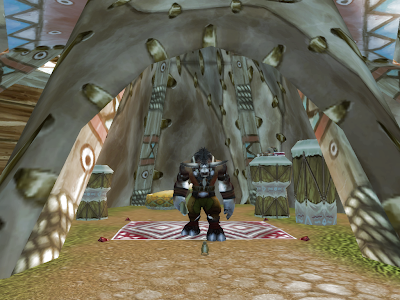 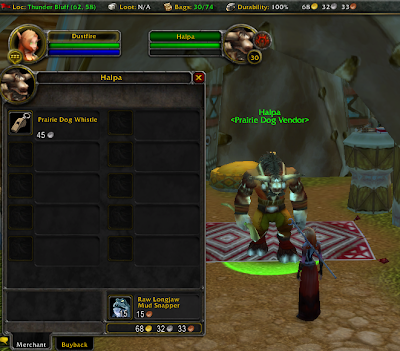 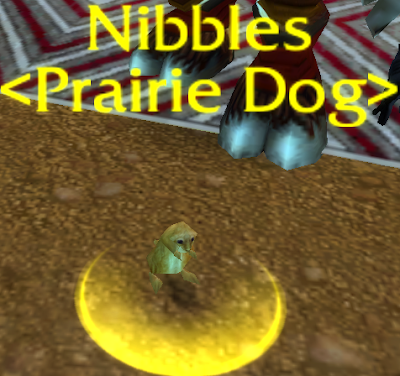