/ginvite [player], or "Plague in the Low Level Lands"

/ginvite [player's name] invites the player to your guild.

Guilds are player groups that can be managed and maintained by the Guild Master, the person who started the guild. It costs in-game money to start a guild, but a guild is a great way to coordinate players and get things done quickly. It's a small (or large) community within the game itself.

Guild chat is usually bright green, as you will see in the screenshot I took.

Charters are the sign-in sheet that you have to fill with 10 signatures (of different player accounts, not just different characters) to make your guild official. They look exactly like quest logs, and a popular method of filling them is to offer silver to anyone who signs.

Since Kbone mentioned that resting has a cap, I decided to get my draenei mage, K______, to level 10 in the Night Elf area. The NE area was chosen in part because of her backstory, part due to how well I know the night elf area from leveling Birdfall, and part due to the fact that she'll look awesome on a night elf mount.

But MAN, had I forgotten how people like to invite non-guilded players to guilds! K______ is pretty well a loner by nature, but I'm thinking about trying to get her into an all-girl guild because, in her backstory, she was attacked by men and doesn't trust them. And because, frankly, if you're not in a guild, you will be PLAGUED FOREVER! And I'm not talking about the nice people who whisper you and are like, "Hey, wanna join?" I'm talking about the reason Auto-Decline addon got created.

So I was killing furbolgs for the chick riding around near Dolanaar, and this night elf hunter was as well. And I was kind of expecting a group invite, since it was a "kill" quest and it would therefore be faster with two people. So when the invite popped up, I accepted, thinking "We'll kill three or four and go our separate ways."

Oooooooh, no. No, no, that would be too easy. GUILD invites apparently look exactly like group invites. Which I didn't know. I thought guild invites all looked like charters. I'm a buffoon.

Read the text on the image below to see how this played out. You'll be glad you did. (The person talking to me is not the person who slapped me with the invite. That person never said a single word to me ever.) 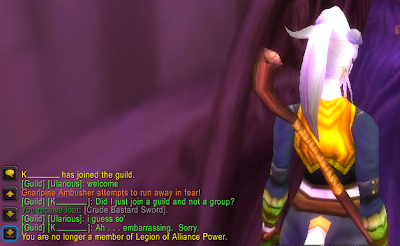