Healers, or "The Butt-Monkeys of Pugging" 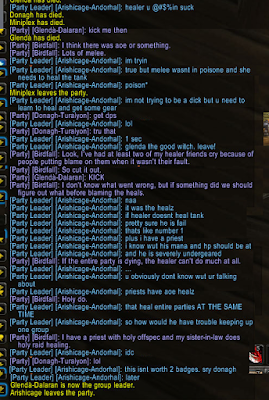 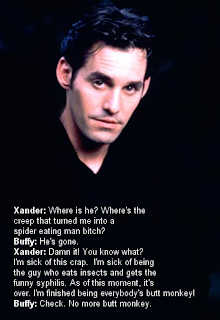 Two things. One, he says he isn't "trying" to be a dick, when he so obviously is being a massive dick. Second, he mentions that he has a priest as a way to defend his right to critique the healer and then brushes me off when I tell him I have experience priest healing, too.

I also want to point out that I didn't know what spec Glenda was (holy), couldn't remember what the other healing spec was (disc), and don't think either would be relevant to the idea that she should or could have kept everyone from dying at once. Even if Glenda didn't heal the tank, and was at fault, that's not what I had a problem with. I had a problem with him being, in his own words, a dick.

[Edit: The reason we wiped. I talked to husband and told him that we had the rogue/mage/shaman bosses and he said the rogue uses fan of knives and, in a group of all melee, there was no way the healer could have held us up -- even if we weren't standing in poison.]

Oh, and third thing, Donagh was Arishicage's yes-man. Just thought I'd point that out, that Donagh agreed with, supported, and laughed along with all Arishicage's jackassery like one of those inane bully sidekicks on TV.

The attacks on Glenda's gear also brings to mind this WoW Insider post that I think should be required reading for every player in the game and you shouldn't be allowed to PUG with civil human beings unless you agree with it.

I then made the mistake of complaining about this experience (the healer abuse, not me getting cranky) to the group I got in afterward. Epics of Scilla said he "could care less" and I had to leave that group before I started screaming at him.

I wanted to rip his head off for it. Seriously. I can't even play anymore tonight, not while I'm crying and shaking and furious. I hate how healers get treated in pugs, and I hate people like Epics who not only don't care but have to tell you that they don't care because not caring just isn't enough.

I go out of my way to compliment people when I have a good run, or even a run that messes up a lot but keeps plugging away. As long as we finish in a reasonable amount of time and everyone stays positive, it's a good run.

One of our younger teens in IVV this morning had to ask us if he was a crap healer because an ENTIRE PUG told him nonstop during an ENTIRE Halls of Reflection run that he wasn't any good. They only wiped once, but they gave him such a hard time from the start that he felt worthless.

My brother and sister-in-law gave him the best responses, imo.

[Name redacted]... first off, know that you can ALWAYS vent/rant/rage to us. We're family, you don't need to apologize for getting emotional. Second, people can be jerks... some of them actually enjoy it. Third, I can testify that HoR was designed specifically to thin the Holy Paladin population and get us all to reroll Resto Shaman or Druids. Fourth, there are things ALL of us can do to improve our play, our gear and our knowledge, but any lack in those areas is NEVER cause for suffering (or giving) abuse at the hands of malicious players.

Finally, and perhaps most importantly, I strongly identify with your feelings here. Try as I might, I really do care that I do a good job and get along with those I'm playing with... this is why for the longest time I just couldn't bring myself to PuG at all. The LFG tool has generally yielded decent folk for me to play with, but there have been a few jerks. Here's what I've done to "fix" the problem... and I'm not just joking around, it really does work... I utilize steps 1 & 2 on all my characters and 3-5 selectively.

You cannot see Party chat, Raid chat, Guild chat, whispers... ANYTHING. To add to the ambiance put on some nice music and just do your job until the job is done. The alternative, as [Name redacted] says, is just to leave and find a different (better) group.

[Name redacted] -- I was told that I was a noob idiot healer two weeks back by a tank while doing Pit of Saron. There were a few things I (and Jon/Z2) noticed-

--He didn't understand "Guardian Spirit" even after I explained that he really WASN'T about to die (he enjoyed abusing me every time he got low).

--He had a very different tanking style than others I've run with. No consideration for mana pools, line of sighting his healer or running to far away from me. He was well geared, but not exceptionally good at the "TEAM" thing.

--He was rude. I laughed and cheered and whispered our Paladin to congratulate him when he won the axe that the tank threw a fit over losing the roll on. If I had been thinking properly, I would've asked for a vote-kick the minute the guy started being rude... but oh well. I got the joy of watching him throw a hissy fit and call us all idiots, etc. It was a true delight because I have not had someone make me that angry (my hands were shaking after he'd gotten under my skin after our one wipe) in a long time.

So I guess what I'm trying to say is-- yeah, healers get trash dumped on them. We're supposed to magically prevent wipes even when we're the one frost-tombed in Utgarde Keep (this happened to me on my druid - /sigh)-- we're supposed to be super people who can be in three places, healing four people who are out of our range at once.

My advice? If they even start to come down on you-- LEAVE. It's so not worth it to run with jerks. Also see if you can't buddy up with a friend to queue for randoms. It makes the experience much better and at least someone will be on YOUR side.

So my question is: while fighting with Arishicage made me angry and miserable, and some might even say I should have let it be and just dropped group, do you think it helps the WoW community at all, or our healers in particular, to just ignore this sort of behavior?

Does even the attempt to defend someone make that person feel more welcome in this game? And is that reason enough to try?
Posted by Beth at 5:19 PM