Naming, or "What I Want is Taken, So I'll Ïmpŗŏvίŝέ" 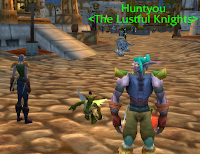 In general, it's really hard to name your characters because a lot of the best names are taken (and names can't be repeated). Fortunately for everyone, there are a few easy ways to get around this.

Trick 1: Replace certain vowels or letters with a tricked-out counterpart from another language. (Example: Ïmpŗŏvίŝέ)

Trick 3: Add an extra letter to the beginning or end of a name. (Examples: Ssteve, Xxmoonlightxx, Ddurr)

Trick 4: Pick a name that nobody else would ever want ever. (Example: Dungpoop)

Trick 5: All of the above. (Example: Ïέatdungpŏŏpp)

Now, some of the things people come up with can be pretty creative and funny, like the screenshot I took of Huntyou, who belongs to The Lustful Knights. That just fits.

But what really gets to me is when I see someone with a name like Dungpoop at level 65. Making a character with a dumb name like that and running it for a few levels before the joke wears out is one thing. But taking it all the way to 70? What are these people thinking?! I mean, I guess they're 8 years old or something, for it to last so long. But why isn't their mother coming in and giving them that look parents get -- you know the look. The one that makes you pick up all of your toys even though they haven't said a single word.

I really just want Blizzard to ban all of the characters with misspelled or dumb names. That, or go in and change it to something reasonable.

I, for one, refuse to group with anyone with a bodily function in their name. Thank you very much.
Posted by Beth at 6:17 PM