Customization Nation, or "Where Avatars Can Be All That They Can Be"

A while back, I went afk for Sims 3 and one of my readers requested my take on the game. Here, I'm going to take a broader view of that request and talk about avatar customization in games in general.

Cosmic Rules of Avatar Customization
Whether you want to look badass, adorable, or just plain hot, the way a player's character looks matters to that person. Even the tough guys going "I just want to pwn face" go "Ooo!" when confronted with cool options.

The biggest draw to The Sims, for example, is the virtually unlimited ways to customize the characters you play. When people get annoyed, it's usually because their customization is limited by the game's capabilities (we still don't have height or bits-of-body adjusters).
This is a rule I learned from years playing The Sims -- hair is the most sought-after commodity in the Simming community because it is the first thing you notice about a character. It was also something WoWers were happy about when Wrath came out -- new hairs!

A good game will have a large assortment of hair types from different cultures/subcultures, from simple to complex. (You'll note that Aion has a lot of wacky complex anime hairstyles but few simple ones.) 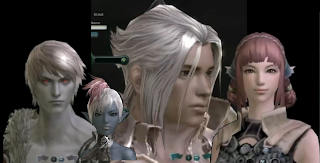 The big thing I don't like about Aion, and I'll just say it, is that the two sides have specific looks they hem you into. I realize it's part of the lore and junk, but I hate limitations no matter how good the reason. When I make my character, I want it to look the way I want it to look, not the way the game creators think it should.
One piece of advice writers give to other writers is to not underestimate your reader's intelligence. Don't dumb stuff down and force details that they could have inferred from the scene's action. Likewise, character customization shouldn't be dumbed down because of worry about player intelligence or computer limitations. Go for the gold, guys. Let us stress about the system specs once we realize we have to play your game because it's so freaking awesome. 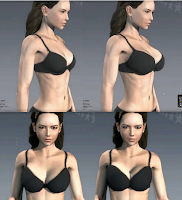 Nor am I just talking about eyes, skin, or body shape (Sims 3's creator company, EA Games, helped Realtime Worlds with All Points Bulletin and they do bodies right in that, from size and lift of boobs to scars, tattoos, and varicose veins).

But I also mean clothing, pets, and rides. Think about what it would be like to have one recolorable hawkstrider instead of a set of ten or a non-combat cat to whom you can add long fur and calico patches. A horse with its own eye patch. A tiger with bloody skulls dangling from the saddle.

Think about clothes you can layer and recolor with patterns and decals, accessories that you can throw on just for looks. Rings that actually show up on your fingers, trinkets that dangle from your belt, necklaces that hang on your neck. 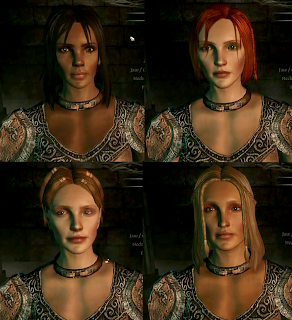 Well, most of us. The one complaint I see in The Sims community on a regular basis is that it's not realistic enough. EA Games intentionally kept The Sims cartoony, just like Blizzard did for WoW, but practically every inch of custom content for The Sims is to make the game look more realistic. If any company came out with an adult version of The Sims, where everything is as photo-realistic as possible (except maybe blank doll bodies for nudity) and put it out as a straightforward creative tool, they would make a mint. I'm not kidding.
One thing I think WoW is doing super-right is letting us customize dances. I think it's appropriate to take that further into customizing our own emotes and the way our characters walk. The WoW comic "Hammer of Grammar" had a particularly funny strip about everyone in an inn on her RolePlay server missing an eye. Well, what if you walked into an inn where everyone limped?

Customization is all about the small things that make your character unique. The placement of a tattoo, the compliment of coloring, the length of hair, the slight turn of a nose. The best custom characters aren't made with premade faces or solid hair colors. It's in the perfect complimentary lipstick, the scar on the side of the mouth.

It's in the subtlety and balance of form instead of just sliding the boob section to "humongous."

Real customization is an overall package. It's not one thing, it's how everything works together in harmony.

One thing I think role-players get right is having a background and personality for your avatar -- customizing their insides as well as their outsides. The Sims gives players options to tell the character's story and let it progress. True, it's a tame "I fell in love and then he died in a freak oven fire accident" sort of story, but it's still a story.

I believe the addition of a full and well-developed lore encourages player creativity. I realize it's unfair to put any game up against Tolkien, but let me use Lord of the Rings Online as an example. You pick your race and you aren't stuck belonging to your race's one city like in WoW -- you get to choose your nationality from a list, such as an elf belonging to Rivendell or Mirkwood or one of three other elven cities.

WoW has respectable enough lore, and like any good game it leads you on a tale of strife, but sometimes it seems to lack flexibility for creative pursuits or story branching. I realize the name is "Warcraft" but sometimes it just seems to be too much about the war. If that makes sense. I'll bring Chrono Trigger back as a contrast -- there was a war in the game, but it wasn't about war. It wasn't about beating back zombie invasions or the other side. It was about completing a fascinating journey. The story itself was epic. Final Fantasy X had the same thing going for it. Yeah, you killed bosses, but it was about a fantastic tale, not about growing your stats to pwn everything.

Those stories had art, creativity, and immersive qualities that I'd like to see in an MMO some day. WoW has done great and innovative things with gameplay and the technology of the game (husband made a 2D video game once and told me "WoW has amazing pathing -- people don't even know how hard that is to get right"), but that doesn't mean there aren't places for even WoW to improve. Though, obviously, it's much better than some. I haven't played Aion extensively, but I've read a bit on it and its biggest creative weakness seems to be shallow lore.

This has NOT been a list of suggestions for WoW to make changes. This has been an overview of the idea of personal customization within an MMO with references to certain games. Please note that I have not suggested ideas for new methods of gameplay because that is not my forte, nor should character customization be confused with the way a game plays. Customization is merely fun and visual and could be implemented in any game without compromising the way the game functions.

The key difference between single-player customization-heavy games like The Sims and multiplayer customization-lite games like WoW is simply that once you've created something you like in The Sims, there's not much else to do. You can run your creation through its little virtual life, but Sim lives are (I hate to say it) pretty cookie-cutter. You get a job, you get a family, you have kids, and the highlight of the game for most players is a Sim's death -- hopefully in an amusing and anecdotal way. In MMOs, you have constantly shifting objectives, often challenging and rewarding. MMOs keep you busy beyond the customization.

Thus, a combination of customization-heavy and entertaining in an MMO would equal a very happy creativity-conscious player.
Posted by Beth at 8:24 AM