Curveless, or "Noxy is the Wowhead Queen of Cute" 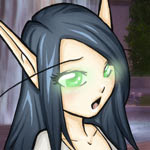 I'm not sure if I'm allowed to repost her comic, so I'm just giving you the link to it. Noxy's comics are adorable and feminine, and this one really set out the annoyances a lot of us have with our limited choices on horde. Blood elves are petite and Taurens have nice child-bearing hips, but only our orc sisters have any real curves -- probably to make up for their excruciating hair and face options. (Undead women do have some buxom rotting flesh, but they also slouch. Slouching = no visible curves.) 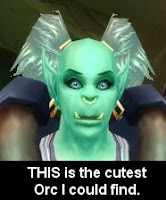 Which brings me to ask: why does The Man have to keep the horde down? What did we ever do to Blizzard? They do, in fact, realize that by making us uglier, they make us "the bad guys" of the game. Forget trusting players to realize that looks alone don't determine motives or personality, or even that many of the horde races were violently oppressed and broke away to try and rebuild a proud, free society -- when you first enter the character creation screen, you get to choose between evil monsters or sexy heroic good guys. That is what people think. It's what I thought. So if the horde isn't actually evil, just misunderstood (which is mostly the case), why can't we get some more good-looking races? Seriously, mix it up a little.

For example, nymphs/dryads for the next alliance race and vrykul for horde. My husband wants ethereals, but I've never seen an ethereal woman and the vrykul women are actually quite pretty, if intense-looking. 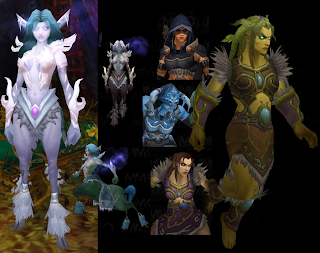 These are just examples and not my all-time "/slitmywrists if I don't get them" favorites. Rather, my call to Blizzard is just . . . please stop giving us butt-ugly women. You did well with the blood elves, making them a pretty race that all the horde can enjoy. But they still don't quite make up for the . . . attribute discrepancy between the factions. They're a good start, though.

Beautiful people can be evil and ugly people can be good. It's about time things got mixed up a little more. Horde might be the underpriveledged bastard child of the game, but do we have to look like it too? Do we have to accept all the races that the alliance reject?

Horde are designed to be earthy, but what that means is a lot of dirt and blood. Real life women, for the most part (some are hardier), don't like dirt and blood. We got some style with the blood elves, but the alliance are designed to inspire feelings of grace and grandeur. We are designed to inspire chest-pounding and grunts. We are, in some ways, more human than the alliance, because our problems are more real, our motives more obvious. Survival, revenge, freedom. But our nobility is less visually obvious. And while I've already stated my feelings in defense of the horde elsewhere, and while it is possible to find horde women attractive and I'm not arguing it isn't, the basic fact of the matter is that girl gamers started playing horde more once we had blood elves. Almost every girl I know (who started her character after BC) plays a blood elf as her main. And her alt. And most of the rest of her alts.

So this is for the Women of the Horde. We like pretty things.


This all is written with the understanding that people who play female horde, even orcs, are usually emotionally attached to their character and find her beautiful in some way. This is natural, since we spend so much time examining our own characters -- even I think the curve of Plum's hip is one of the prettiest things in the game, and she's a furry cow.

I also understand that some female players don't want to be lumped into the "pretty things YAY" group and wish to be taken seriously as hardcore gamers. While I think it's possible to do both, I also understand the viewpoint. And that's fine. But I've found that most of the women I know play with a boyfriend or spouse and enjoy the visual aspects more than the technical aspects. My generalizations obviously have exceptions but, in my experience, it's more common that women like visually pleasing things than not.
Posted by Beth at 9:13 AM